Kota Takeuchi : "What I Got From ACC" Kota Takeuchi in Toppenish, Washington, in January 2018, "re-enacting" with a small drone the movement of a balloon bomb that fell in the area on March 10, 1945. (Photo by Joel Neville Anderson)

Based on in-depth research, Kota Takeuchi creates works using a wide range of methods, including video, photography, installation, and live performance. He tries to discover the characteristics of the relationships between people and media that reflect records and memories, and the human emotions and consciousness that arise from them.

Kota moved to Fukushima Prefecture after the Great East Japan Earthquake, and while working at TEPCO's Fukushima Daiichi Nuclear Power Plant, his activities as a proxy for a "pointing worker" who points at live cameras inside the plant also attracted attention. He is also a recipient of the Tokyo Contemporary Art Award (TCAA) 2021-2023, as one of the most promising contemporary artists.

As an ACC grantee, he undertook research in the United States for six months in 2017-2018.
In this interview, he reflects on those days and his thoughts on his work.

Instead of Being Reticent

The reason why I applied to ACC was, of course, that I had a specific plan and concept, but I also had a strong wish to "try it out.” As a result of my present and past works, I have mistakenly been regarded as a social activist, but I have been far from such solidarity movements. I have always just created and presented works on my own on the fringes of society. On the other hand, I agonized over whether I was doing the right thing, being a bystander, waiting and seeing what is going on in such a world where everyone is actively connecting with each other through SNS. I want to be eloquent as an artist even though I am reticent in society. I wanted to find out how far such an idea could go.

After returning from my dream trip to the U.S., which was actualized by ACC, I compiled my thoughts into a booklet titled "Echo Shooting: Blind Bombing”. I wanted to express my thoughts and feelings properly and confirm my motivation for the work. By going abroad and interacting with new perspectives and people, I was able to reevaluate myself observing from a distant place and express myself properly in words, which I think was really good.

The three months I spent in New York from October 2017 were very important to me. It was a good opportunity for me to learn English conversation, etiquette and manners, and a minimum level of sociability that I might have lost if I had been alone. These are all very important when you work socially as an artist. I also reconsidered the support I received from people and the words I heard from them. I have changed a lot by meeting with people from ACC, people I've been introduced to, and people I've met by chance. I used to be the kind of person who mumbled to himself and then turned away, but now I enjoy greeting and interacting with newly met people.

I met a Burmese artist and fellow ACC grantee in New York who was cheerful, sociable, with a good sense of humor. I am researching Myanmar and would like to be close to its region historically, locally and culturally by receiving his support. I am paying attention to the current domestic situation there. I hope that those who are suffering in Myanmar will be able to return to a free and peaceful life as soon as possible.

From January to March 2018, I traveled around the West Coast and Midwest of the U.S., mainly to Washington, Oregon, Utah, and Idaho, with a rental car, to conduct research and take photographs.
The trip was about "balloon bombs". During WWII, the Japanese military made balloons tied with bombs to attack the United States. About 9,300 bombs were released from Chiba, Ibaraki, and Fukushima. It is said that several hundred of them reached the North American continent by the westerly winds. I learned about this history in 2013 and have been researching about it. I visited the places where the balloons actually fell, and I filmed the balloons in various locations, using a drone to act out what the last movement of the balloons might have been, by tracing the routes according to the testimonies recorded in the official documents. The image of balloons is peaceful and tranquil, but bombs are not. The person who releases the balloon bomb, which flies with the wind, does not see the other person directly. As I thought about this, it occurred to me that modern SNS is exactly the same–like flying objects, the ones which are released without care for others. Balloon bombs are like a weapon, but also like media, and SNS is a type of media, but also like a weapon, and I saw a connection. I am thinking about the relationship between media, humans, and remote communications.

I believe that it is one of the meanings of art to be able to have such a point of view, to be able to look at the present through the lens of the past, to see what the knowledge found in the past means in the present.

I drove thousands of kilometers across the States. At first, I was recklessly thinking of doing it by bicycle...I didn't realize how vast the land is and how long it would take to get there. I've seen many movies and TV dramas about the U.S., but most of the time the scenes of people moving around are cut out (laughs). The ACC staff advised me that it would be difficult to travel by bicycle, and since I didn't have a car license, I went to a driving school before I visited the U.S.

The sites where balloon bombs had fallen were wide and open wastelands or bleak landscapes with mountains and shrubs. I try to take time to show them in my work. There is a vastness in this country, and residences are sparsely scattered. There were victims of balloon bombs and witnesses exist, though the U.S. military has hushed it up, and the Japanese military has destroyed the records...

When you look at things from different angles, at a distance or up close, and repeat the process, you will see the scene in three dimensions. You will see a gap between what you had in your mind as knowledge and history, and experience this gap. It will give you an opportunity to think about what media is, and the relationship between images and physical sensations. The long, bleak drive let me realize about these expressions. It also was a good experience for me to understand the country of the United States. The TCAA, which I recently won, is supporting my work abroad and it also gives me a chance to have an exhibition at the Museum of Contemporary Art Tokyo. I am planning to go back to the U.S. and continue to work on researching balloon bombs. What I received from ACC continues to live both in my work and myself. I would like to thank you for your support.

(Interviewed and Edited by Misao Matsudaira)

* Due to various matters of sensitivity, some content has been modified. 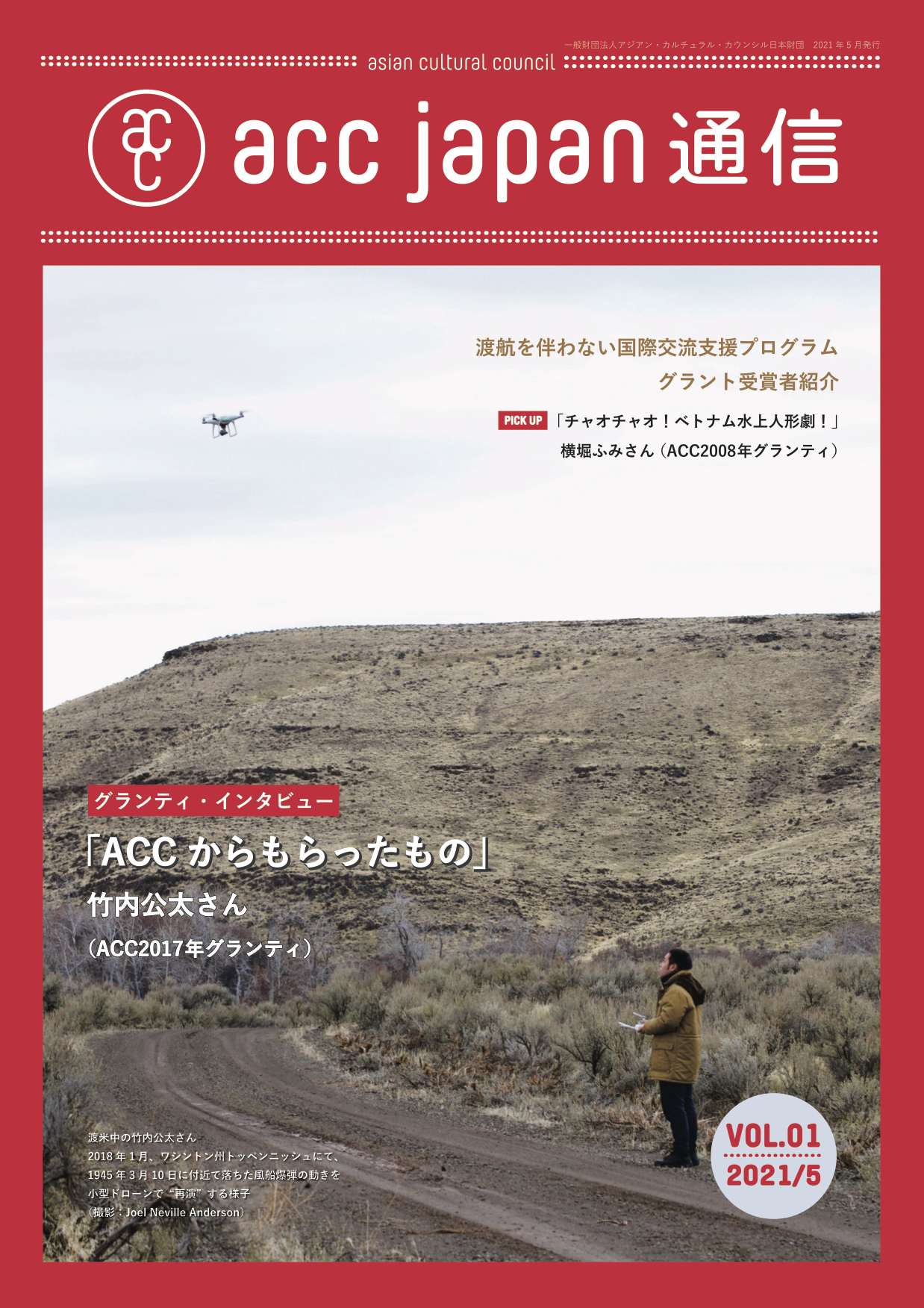