Please stay tuned for future events! If you wish to make a donation in support of ACC's programs and initiatives, please visit: https://www.asianculturalcouncil.org/about-acc/support/new-york.

On May 11th, ACC celebrated our 60th Anniversary Gala at TAO Downtown in New York City. It was an unforgettable evening, connecting our extended ACC family from around the world in recognition of the Asian Cultural Council and distinguished honoree Akiko Yamazaki and John D. Rockefeller 3rd awardees Midori and Cai Guo-Qiang. We thank our generous supporters in making this gala ACC’s most successful fundraising event to date. 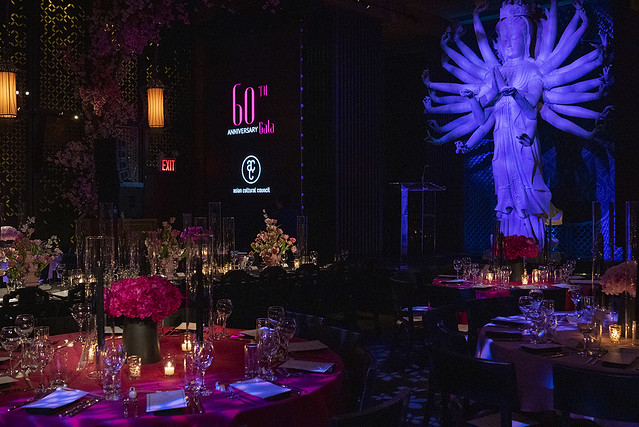 As a leader and collector, Akiko Yamazaki has championed Asian art and culture over the last two decades. Yamazaki joined the San Francisco Asian Art Museum Board in 1997 and has served on multiple leadership roles, including President and Board Chair. As Board Chair (2014-2020), Yamazaki led the $100M Transformation Project, which doubled the museum’s special exhibition space, reinstalled permanent galleries centered around masterpieces, infused digital technology throughout, strengthened the contemporary art program and doubled the museum’s endowment fund. In addition, Yamazaki serves on the Advisory Council of the Stanford Cantor Center for the Arts and has been a supporter of its Asian American Art Initiative. She recently joined the Department of Asian Art Visiting Committee at The Met.

Yamazaki co-founded the Wildlife Conservation Network in 2001 and recently joined the Wildlife Conservation Society Board. She is a member of the Advisory Council of the Woods Institute of the Environment at Stanford University, her alma mater, and served as Chair for the Task Force supporting the launch of Stanford University’s new school focused on Sustainability (fall 2022). As a life-long equestrian and active dressage competitor, she is an Executive Committee member of the US Equestrian Team Foundation Advisory Board and sponsor of horses for Team USA. Recently, Yamazaki’s horse, Suppenkasper, was part of the historic Silver Medal winning team in Tokyo 2020.

Cai Guo-Qiang (b. 1957, Quanzhou, China) works across artistic mediums, including drawing, painting, installation, video, and performance. Trained in stage design at the Shanghai Theatre Academy, Cai began to experiment with gunpowder painting in his hometown, Quanzhou, and later in Japan from 1986 to 1995. Experimentation with scale and form of these gunpowder works led to the development of his signature outdoor explosion events. Drawing upon Eastern philosophy and contemporary social issues as a conceptual basis, his often site-specific artworks respond to local cultures and histories and establish a dialogue between viewers and the universe around them. His explosion art and installations are imbued with a force that transcends the two-dimensional plane to engage with society and nature.

Cai Guo-Qiang received an ACC Fellowship in 1995, during which he created his first work in the United States—a miniature mushroom cloud at the Nevada Nuclear Test Site. He has since been awarded the Venice Biennale’s Golden Lion (1999), the Hiroshima Art Prize (2007), and in 2012, received both the Praemium Imperiale and the U.S. Department of State Medal of the Arts for commitment to international cultural exchange. His explosive work has been featured in the 2008 Beijing Olympics opening and closing ceremonies, the Metropolitan Museum of Art (2006), the Solomon R. Guggenheim Museum (2008), and Netflix documentary Sky Ladder (2015), as well as museums throughout Europe in the traveling series Individual’s Journey Through Western Art History. This series culminated in Homecoming (2020), the first solo exhibition of contemporary art at the Palace Museum, Beijing. A generous philanthropist, Cai Guo-Qiang founded the Cai Foundation (2014) to support emerging contemporary artists worldwide. The Cai Foundation and Asian Cultural Council are proud to enter their sixth year of partnership supporting cultural exchange opportunities for the next generation of artists from Asia and the U.S.

Midori (b. 1971, Osaka, Japan) is a visionary artist, activist and educator who explores and builds connections between music and the human experience. Midori breaks with traditional boundaries, which makes her one of the most outstanding violinists of our time. She began her violin studies with her mother, Setsu Goto, at an early age, and was invited at age 11 to perform with the New York Philharmonic in the orchestra’s annual New Year’s Eve concert. In the years since, she has performed with the world’s most prestigious orchestras and musicians of our time, including Leonard Bernstein and Yo-Yo Ma. During the 2021-2022 season, Midori performed the world premiere of Detlev Glanert’s Violin Concerto No. 2 with the Royal Scottish National Orchestra and with NDR Elbphilharmonie Orchestra; she also appeared and recorded with the Festival Strings Lucerne; she performed on tour in the US, Europe and Asia.

Midori is deeply committed to furthering humanitarian and educational goals such as creating more equitable access to music education, particularly in developing regions and for marginalized population groups. To that end, she has founded several non-profit organizations: Midori & Friends (New York); MUSIC SHARING (Japan); Partners in Performance (PiP), which brings chamber music to smaller communities in the U.S.; and the Orchestra Residencies Program (ORP), which supports American youth orchestras. In 2009, MUSIC SHARING received an ACC Fellowship to support musicians to participate in their International Community Engagement Program (ICEP) in Mongolia.

In recognition of her work as an artist and humanitarian, she serves as a United Nations Messenger of Peace, and in 2021, she was named a Kennedy Center Honoree. She also holds academic positions at the Curtis Institute of Music and the Peabody Institute. The most recent recording in Midori’s diverse discography is Beethoven’s Violin Concerto and two Romances with the Festival Strings Lucerne (2020, Warner Classics). She plays the 1734 Guarnerius del Gesù ‘ex-Huberman’ and uses four bows – two by Dominique Peccatte, one by François Peccatte and one by Paul Siefried.

Back to Top to Purchase Tickets